This came in from a trusted source and I made some minor edits with the author's approval:
"Here's some stuff I remember about the 'Throne Room' sequence (not sure what it was actually called in the production). The scenes of the Princess first seeing the Cobbler as he's dragged across the drawbridge, and the following scenes in the 'Throne Room' sequence have some history behind them.
For many years the various drafts of the script for The Thief featured the twin Princesses Yum Yum and Mee Mee, one of whom was in love with a reptilian beast called Bubba. A few inspirational watercolors were produced by Dick and Errol le Cain which suggested early ideas for the look of the Princesses.
Later on, during the mid-1970s, Dick was working with the New York animator Tissa David on the production 'Raggedy Ann and Andy' and, impressed by her sensitivity animating Raggedy Ann, he hired Tissa to produce some rough animation of the two Princesses bathing and talking in the palace bathroom. Some of Tissa's rough pencil animation can still be seen in the various rough cuts of the film. 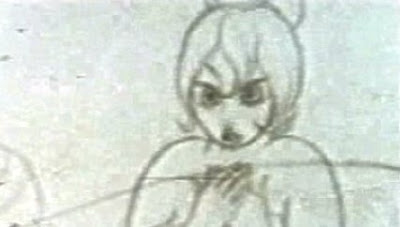 In 1988 (after Dick's success with 'Who Framed Roger Rabbit') Jake Eberts became the Executive Producer of The Thief. Jake (or rather his company) invested some development money in the film and then he and Dick got Warner Bros interested, and then signed up at some point in 1989.
Jake encouraged Dick to pare down the script which was running at 160 pages plus. Two of the casualties of this process were the Princess Mee Mee and the beast Bubba, both of whom were removed from the story entirely.

Later in 1990 or 91 Dick was under pressure to produce color shots of all the main characters in the story, possibly for a presentation of the film at Cannes, so that distributors and possible merchandising partners could get a sense of how they would work on screen. Although there were already plenty of color sequences featuring the character of the Thief, as well as some color footage of the Witch, the King, Zig Zag, and the single 'Laughing Brigand' shot, there were no final shots of either the Cobbler or the Princess. Dick set about animating a shot of the Princess stepping away from the camera and looking demure, which had been inspired by a shot from a live action film (the name of which escapes me). Dick also animated the patterns of light and shadow moving over the Princess, and these drawings were traced into mattes and used by John Leatherbarrow to create a dappled, multi-colored light playing over the figure of the Princess. This single shot remained the only color example of the Princess for quite some time and was eventually used as the final shot of the Princess in the 'Throne Room' sequence. If you look closely you can see that the Princess has slightly different, slightly more naturalistic proportions in this shot, compared with any others, and this is simply because it was an early attempt to find the final look of the character. As Dick drew more scenes he refined and simplified her.

About the same time Dick was exploring the design of the Princess he took some rough animation of the Cobbler that Art Babbitt had done as a movement test several years before, and began to develop it as a full color test. Dick had initially based the character of the Cobbler on the 'baby faced' silent comedian Harry Langdon, and taking this as his cue. Babbitt had animated a test of the Cobbler waddling about with a slightly sped up, silent film feel. Dick took this animation and refined it, drawing over it with an updated design. This was traced, painted and used as the test shot to show potential investors how the Cobbler would look on screen.

A couple of years later, when the film was fully in production, Dick gave the artwork used in this test sequence to Neil Boyle, who had to build two shots in the 'Throne Room' sequence around it. The first section of the animation was used to show the Cobbler entering the Throne Room, and Neil added some animation of the guards moving up behind him, while Andreas Wessel-Therhorn added the courtiers looking on.

Then, in the next section of Art/Dick's Cobbler animation the Cobbler scuttled around erratically before turning back to the camera. Neil had to create new animation of Zig Zag producing a telescopic wand from thin air and hooking it around the Cobbler's neck as if the Cobbler was being pulled back towards us by Zig Zag.

In this way, both the test shots of the Cobbler and the Princess were integrated into the final production footage."
Posted by Holger at 1:26 PM

Excellent post-seems you guys have decided to go through the film chronologically-it's truly fascinating to read this blog. What a way to recount the making of a film-a book could never achieve this.
Incorporating stills & film clips & your memories spurring others to get involved makes it interactive.
Please promise never to do a 'Hans Bacher' & delete the whole thing!

Thanks Matt. I like the chronological approach, but I'd be happy to see posts about other parts of the movie anytime.
I suspect Hans did what he did in order not to compete with his own book. I don't see potential for that problem for us. Feedback like yours is part of what makes this much more fun than a book.