Was this article from Michael Sporn's blog ever linked here?

"While working on Raggedy Ann and being somewhat close with Richard Williams when he was in town, I was amused by something that happened early on.
Dick was in and out often recording and editing the voice track. A lot of time was spent in the rehearsal studios in the Broadway/theatrical of town. (That was about three blocks away from the studio.) In an elevator ride up to the rehearsal space, Dick overheard a large black man in the elevator. I believe he was a delivery guy, maybe a messenger.
Dick popped up in a flash. He immediately asked the guy if he had ever done any acting. No? Well, Dick hired him on the spot to be the voice of the leader of the One Eyes. His voice was incredibly deep and dark.
Within the week, Dick had rerecorded the lines. (Another actor had done him in England, and Dick was looking for something better.) To be honest, I’m not sure if this was actually the final voice used in the film (it could be), but the story was so entertaining to some fly-on-the-wall like me, that I remember it well.
After recording the piece, Dick did a thank you drawing for the guy. I made a xerox. This is that copy done with drying magic markers." 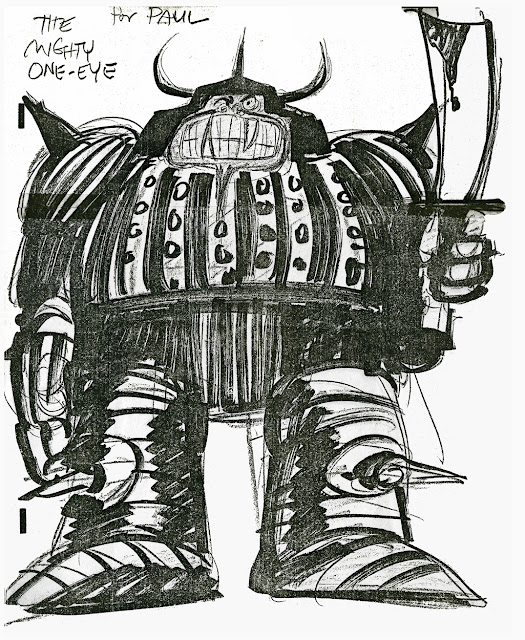 Newer Posts Older Posts Home
Subscribe to: Posts (Atom)
This blog is dedicated to the work on Dick Williams' "The Thief and the Cobbler".