Further Roy magic on Neil's blog:
http://thelastbelleblog.blogspot.com/2012/11/mr-naisbitts-amazing-brain.html
Posted by Holger at 10:41 AM No comments:

It has been pointed out that Roy Naisbit is one of the few real geniuses in animation.
However, that isn't just limited to providing funky layouts that mess with your mind when you pan along them.
A shortage of motorized peg-bars on a rostrum camera will ultimately limit ones ability to have complicated multi-layer scenes.
Here is, reconstructed from memory, a background Roy once showed me in the basement of 138 Royal College Street.
I can't vouchsafe for the total accuracy of my version, but in principle, that's how it worked.
It was big, about 4 feet by 4 feet and it was the most beautiful thing I had seen up until then.

How Roy does it... from Felix Sputnik on Vimeo.

Ever wondered where Mr. Williams got the idea for the elaborate outdoor assembly of pipework from?
Living in London, I guess.
Terry Gilliam once pointed out that he was so baffled by London's outdoor plumbing, added onto Victorian buildings as an afterthought, that he based the ducts in "Brazil" on it.
One big umbilical, connecting it all

This past Wednesday, Sharon and I made our way to Kings Cross and boarded the 10:35 to Leeds.
Why?
Kevin Schreck had organized some complementary tickets for "Persistence of Vision" which was part of the "Leeds International Film Festival" program, and as we had never been to Leeds, this seemed like an excellent excuse.
Leeds is nice by the way, if anyone fancies going.
The film was playing in the town hall, which in itself is worth the price of admission. 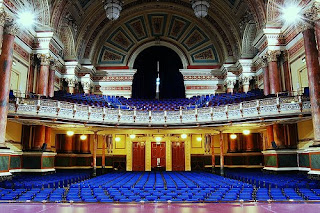 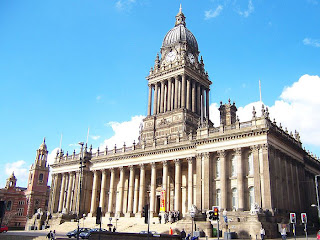 We met up with Brent Odell and Claire Wright (Backgrounds).
Claire did not take part in the film, but happens to live in Leeds and found out via facebook.

I was slightly apprehensive about the movie, not because I doubted it would be interesting, but because I was interviewed for it 2 years ago and just wondered what sort of nonsense I may have spouted.

For anyone who knows little about the Thief, this must be a real mind blower.
For starters it is a competent introduction to the general work of Richard Williams, spending the first hour concentrating on the rise of his business in London, commercial work and finally his involvement in "Who framed Roger Rabbit".
Interwoven in all this is the tale of Dick and the two Shahs, the development of the Nasrudin illustrations and their transition into the film medium.
All this is peppered with soundbites from Ramon Modiano, Richard Burdett, John Culhane and Howard Blake, recounting their time in the studio long long before any of us arrived for the final sprint.

When the film kicks into "Thief" gear, the ark of : "takeoff, flight and crash" becomes palpable, and even though you know the outcome, you still find yourself rooting for the filmmaker.

Both sides of the struggle between artist and financier are told by people who themselves had no stake in the affair, so instead of trying to find out who was to blame for the crash, it points out the basic incompatibility between the investors and the guy with the vision.
And while I fully understand that Mr Williams did not want to talk about it, and though it would have been interesting to hear his angle, I think it has not really been to the detriment of this documentary.

Dick certainly comes out smelling of roses. After all who would have wanted to see a film about a financially successful artistic compromise.

The end of the movie concentrates on what the "Thief" turned into and the influences, the material had on Disney's "Aladdin".
Some amusing comparisons.

What struck me was the footage of the impromptu wrap party, that happened when the "Completion Bond Company" closed down production.
Because I left the film some 2 month prior, I was not there and seeing the lost look on Roy Nesbitts face when the camera inadvertently catches his eye sent shiver down my spine.

Kevin Schreck said, that he had a lifelong fascination with the "Thief".
Lifelong indeed, when Dick signed the production deal with WB in 1988 Mr. Schreck presumably wasn't yet born.

To sum it up, "Persistence of Vision" is a love letter to the stamina and artistry of an animation icon, and without any attempt at sycophancy and saccharine coating, rings true about the creative struggle facing people with real ideas in a "big money industry".
There is even a touching moment when one of the Nasrudin stories is told to emphasize a particular point.

I hope it gets a wider release, if copyright issues will or can ever be resolved.

And if it plays at a festival near you... go see it.

Michael
Posted by Michael at 4:56 AM 3 comments: 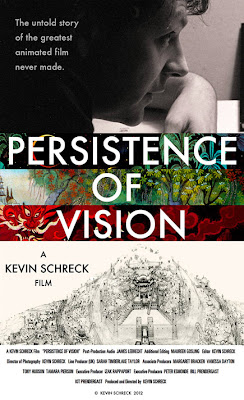 Permanent exhibition on the life and art of Errol Le Cain

Hello Everyone
The Eurasian Association of Singapore is considering a permanent exhibition on the life and art of Errol Le Cain, who was Eurasian and from Singapore. I am writing his biography.
Very grateful to anyone who would please take the time to write to me at errollecainlegacy@gmail.com with ANY information, anecdotes and comments on working with Errol, his art and any information at all that could add to the biography.
Richard Williams has kindly consented to answer some questions and to write a paragraph or two.
Thanks and Health to all
Denyse Tessensohn
Singapore 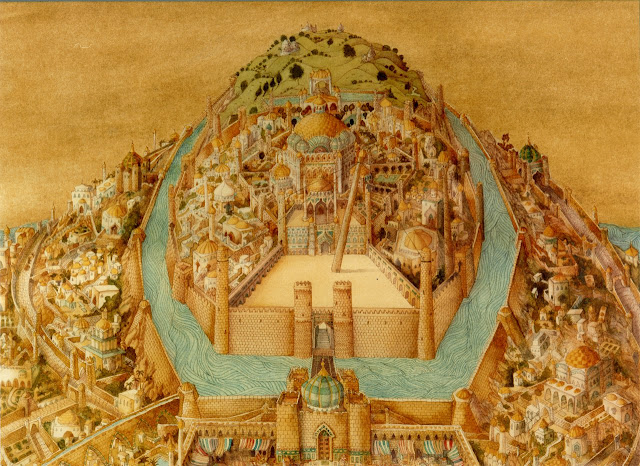 Been digging out the old slides and scanning them to prevent detoriation. So without further ado, just a few images of BG art, Cel art and Colormodels: 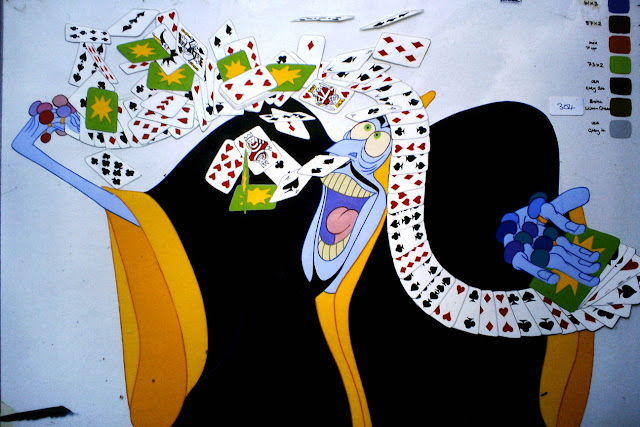 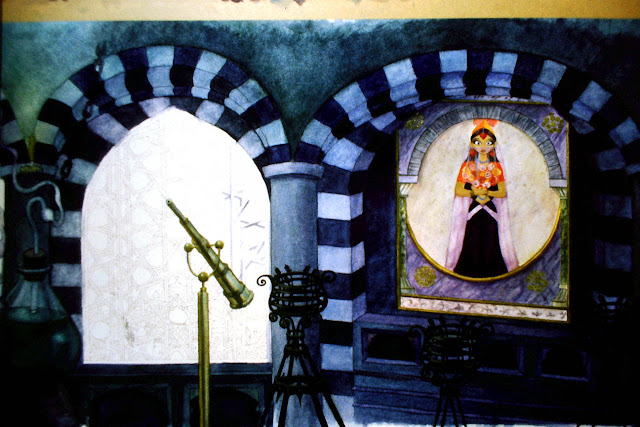 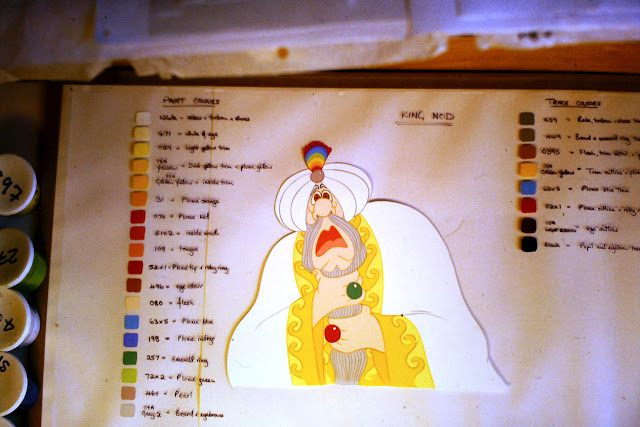 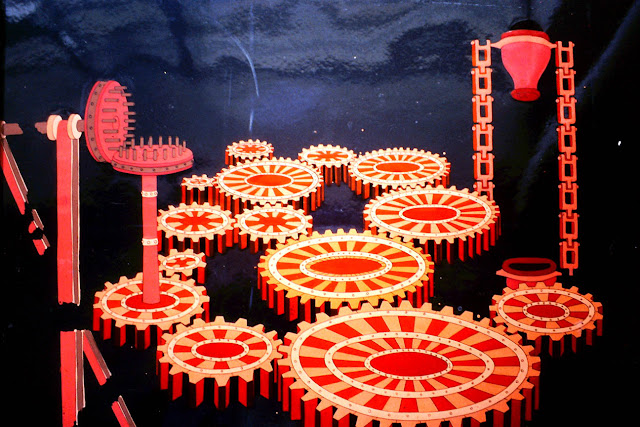 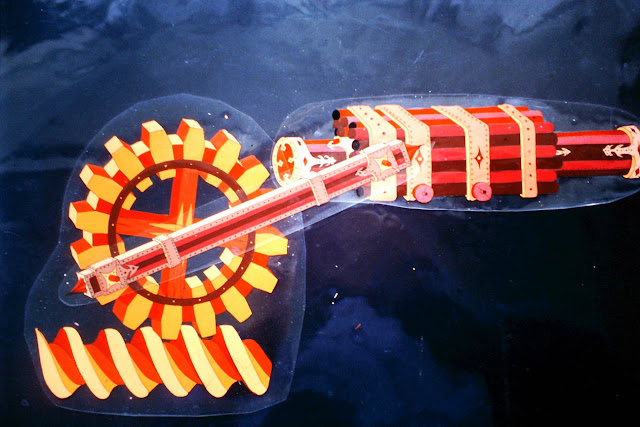 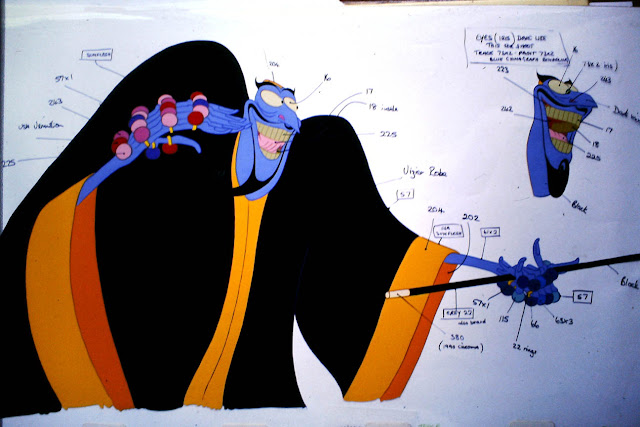 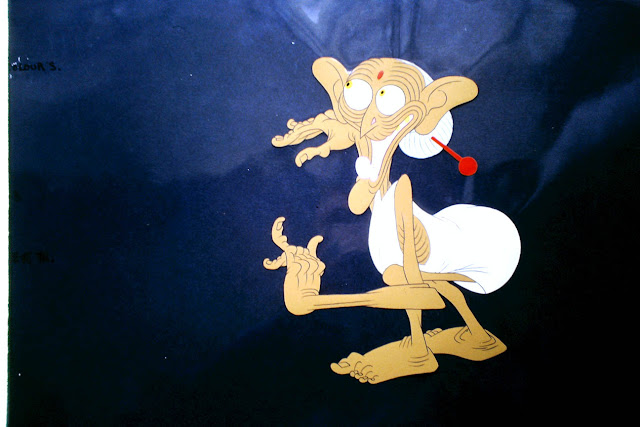 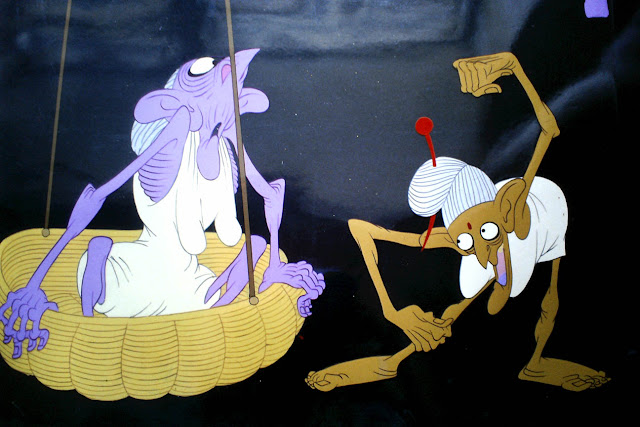 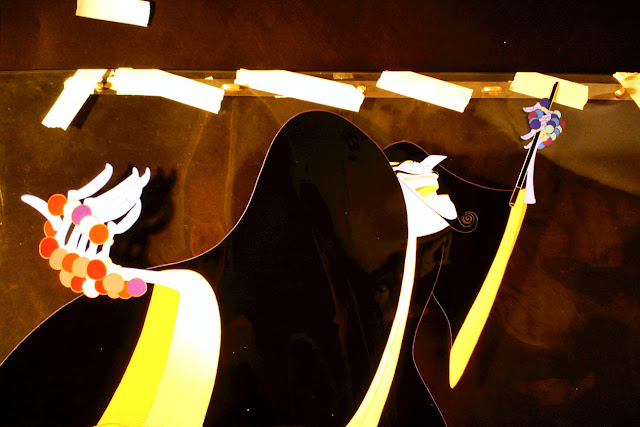 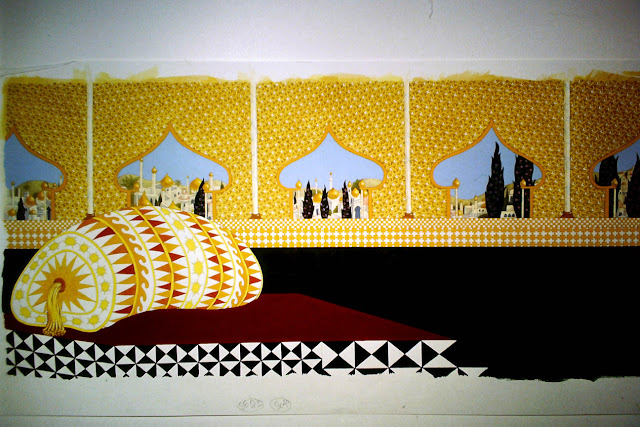 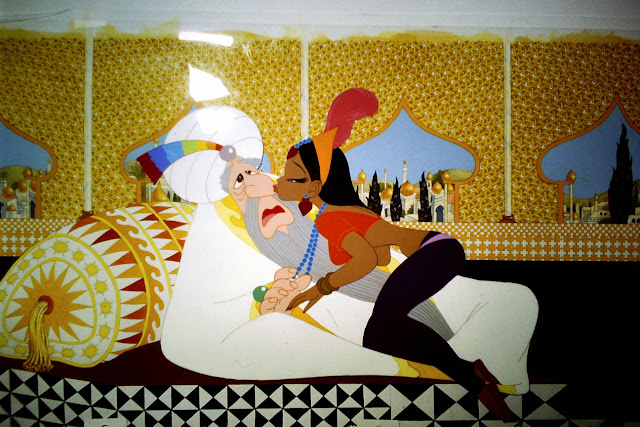 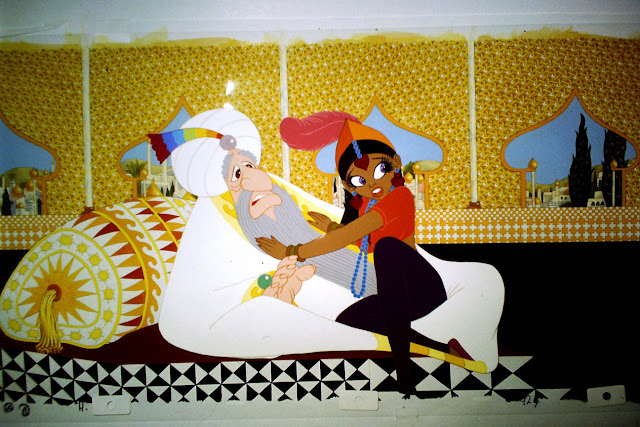 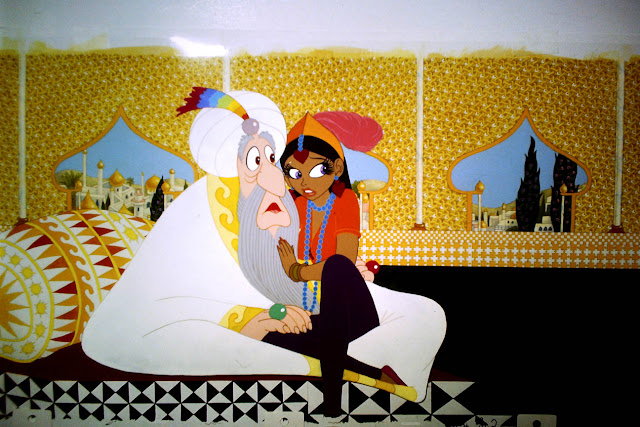 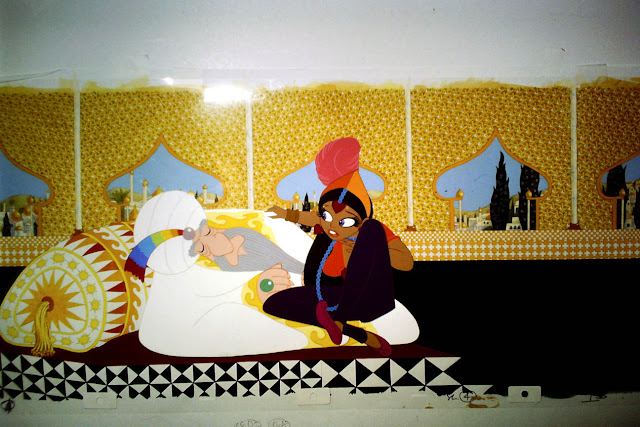 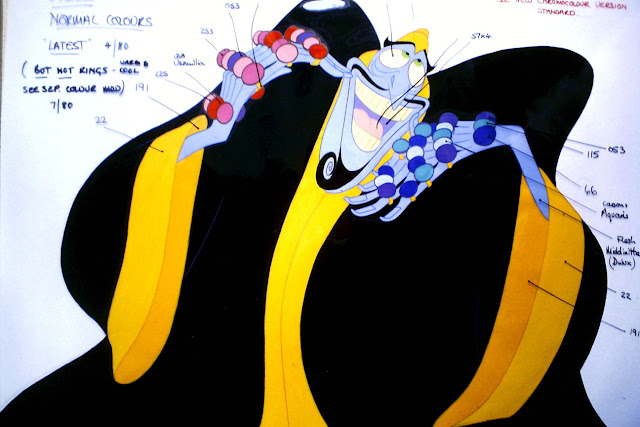 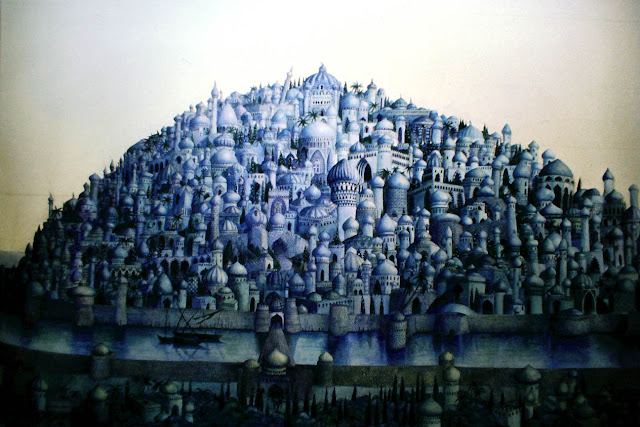 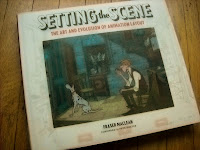 Nice book. Several pages about layout and camera work on the Thief and many quotes by Roy Naisbitt and John Leatherbarrow throughout the book. 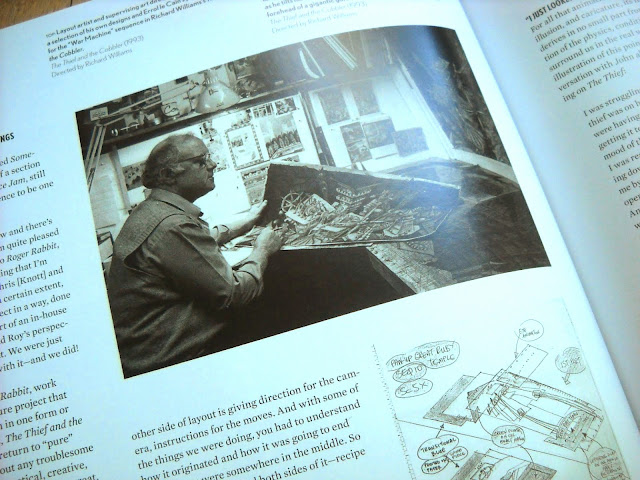 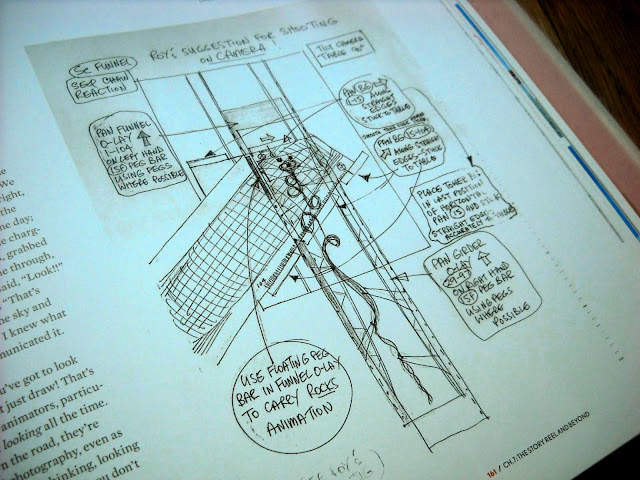 I recently watched a few Laurel&Hardy shorts and in one of them I recognized the shots that Dick used as reference for the animation of Zigzag stepping on the tack. The short is called "Angora Love".
http://en.wikipedia.org/wiki/Angora_Love 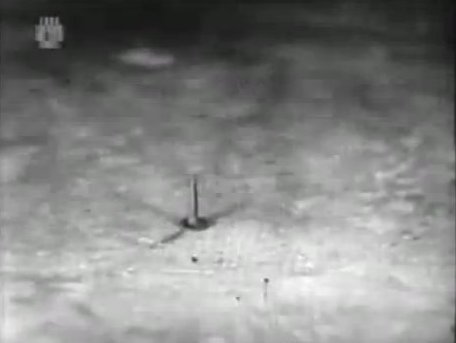 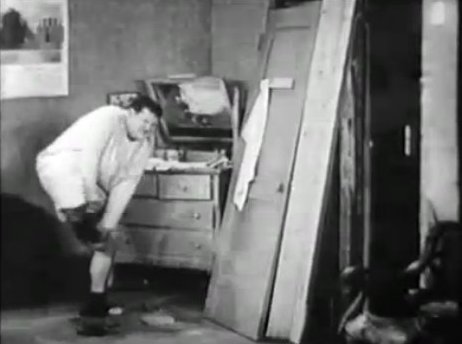 As a kid I watched a lot of Laurel&Hardy films on German television. Comedian Hanns Dieter Hüsch did narration and also voice over for all the characters. When I think of Laurel&Hardy I always imagine hearing his voice. You might want to search for "Die nächtliche Ziegenwäsche". There is a clip that has the shots that Dick used around the 8:50 mark.
Posted by Holger at 12:51 PM 1 comment:

Labels: reference used, updates
Newer Posts Older Posts Home
Subscribe to: Posts (Atom)
This blog is dedicated to the work on Dick Williams' "The Thief and the Cobbler".