The major text book of the animation trade has just been updated. In the DVD version of "The Animator's Survival Kit", Dick had already added more material than what had been in the first edition of the book. Now the good news is that after finishing the DVDs, Dick went back to work on a new "Expanded Edition" of the book, updating it with the additional material. 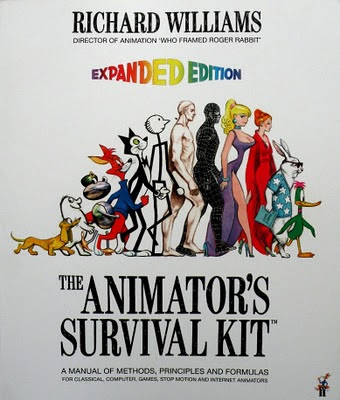 The added material is nicely organized at the end of the book: 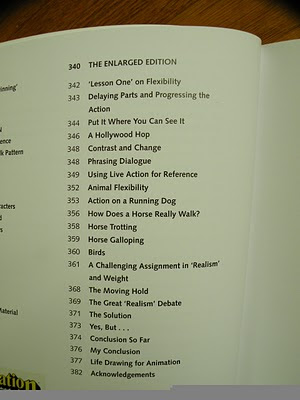 Here is an example page with a beautiful analysis of animal motion. 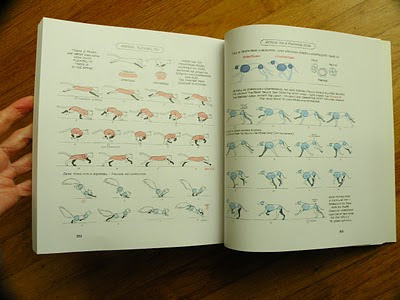 You don't want to miss the lectures on the DVDs, where Dick talks you through everything, but the book is indispensable for animators in their day to day work. I'm glad I have it in my book shelf.
Posted by Holger at 1:00 PM 7 comments:

Happy 2010! It's been a while since my last post and even longer since I posted about one of my scenes. (Link to "Thief climbs up witch mountain").
I will jump ahead several scenes to the last scene of the flying sequence that I animated. I've recently found some slides that I just scanned in and which I would like to share.
In the scenes leading up to this one I had animated the Thief doing all sorts of air acrobatics. For the grand finale Dick had asked me to animate the Thief flying across the witch mountain. I remember that I really enjoyed drawing the background layout for this one.

Dick had the idea of using Roy's strobing trick again.

In this scene with the Cobbler Roy had spaced the round spiral elements corresponding to the spacing of the BG pan and then rotated the spirals so that they appeared to move. Dick wanted the hands to appear moving, as if they were trying to grab the Thief as he was flying by. So preparing for the layout - the first thing I did was to animate a hand doing a grabbing motion. I put registration marks on these animation drawings and xeroxed them several times, increasing and then decreasing in size to create the illusion of a round mountain. I had animated the Thief already and line-tested him with a BG-pan that consisted just of rough wiggly lines to determine how long the drawing for the pan would have to be. It turned out that it would be one of the longest pans used in the film. Then I started placing the hands on the layout corresponding to the spacing of the pan increments, just as Roy had done it, but with one difference. Dick didn't want the effect to be as exact as in the Cobbler scene, so I worked out a stagger pattern, so that the hands appeared to be shaking a bit. 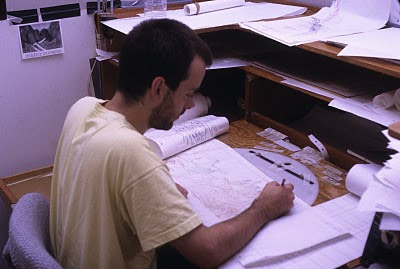 Inga Davelouse turned my layout drawing into the final BG painting that you see below. She painted it in sections that were then taped together. 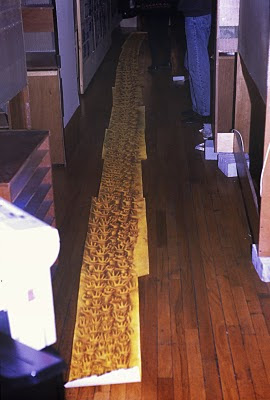 Here are the people from the checking department shooting the scene for a video test. 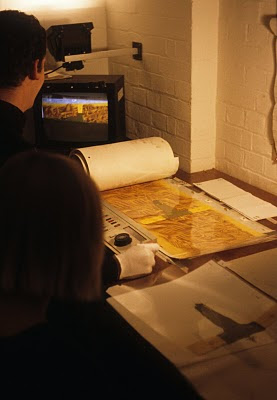 Labels: scenes
Newer Posts Older Posts Home
Subscribe to: Posts (Atom)
This blog is dedicated to the work on Dick Williams' "The Thief and the Cobbler".