Here is another guest post by Paul. "The Thief" reader Justin left a comment on Paul's first post: "Big thanks to you Paul for sharing your experience! Always been a huge admirer of the film and Errol's other work... So could you say more about the "bath" and the specific process/ materials you'd use to make one of the BG's?"
Here is Paul's reply: "A lot of Errol's backgrounds were in the film. I think he did the Lion Fountain sequence, a lot of the market stalls, the atmospheric distant hills, the city behind Yum Yum's beautifully rendered roses, and a lot of the War Machine. I never met him, so I don't know too much about his techniques, but I was told he often put his backgrounds in a bath. I tried this with the Zig Zag tower background which had a sort of milky sky. Dick wanted more stars in the sky and the city outside the window more "magical," and he gave me some Edmund Dulac photocopies from "The Arabian Nights" and "The Rubaiyat of Omar Khyyam," as well as some photocopies of Persian miniatures. There was always a lot of reference to look at.
Anyway, I must have dipped the background in the bath half a dozen times,taking it out of the water, adding more blues and greys, and trying to feather out the "tide lines" with a soft brush. Gradually the sky became fuller and milkier, so I put the stars on and John made them twinkle under the camera.
We usually used gouache for the skies as the chalk in the gouache got rid of a lot of the streakiness that sometimes happens if you do a wash with watercolours. However, watercolour washes were used for lots of the really dark backgrounds and gently airbrushed on top to hide any streaks. Generally we tried not to use airbrushing. Some watercolours really stain the paper and you can get a really intense dark effect, e.g. for the Camp of the One Eyes and in the War Machine. Some people were naturally more suited to certain scenes and we each tended to get whole sequences of those scenes. Some of the skies were absolutely flat, some a vignette of two colours and some milky and cloudy. Sometimes spiralling Persian miniature clouds floated by. That looked great on a flat sky. When the grey Polo Scene sky met the peacock blue "beauteous evening" sky Dick stuck a rainbow effect in to hide the join. It worked perfectly.
Anyway, the idea of dipping the backgrounds into a bath was that some of the colours floated off and some remained on the paper (we used watercolour paper, not illustration board.) It made everything look richer, like an underpainting for an oil painting. For rocky scenes, (e.g. in Tack's cell,) you can get a good craggy effect by dabbing randomly with a paper towel after wetting the bg. Then put more colours on and keep doing it 'til it looks rocky. There was often a slight grainy effect of the waterclour on the paper which you often see in the Dulac illustrations. If we had used acrylic animation paints it wouldn't have had the same lightness with the paper being part of everything and adding atmosphere. I guess all this is kind of stating the obvious, but if this is in some way useful then so be it!
Anyway, it was areal privilege to have had the opportunity to work on The Thief. Absolutely."
Posted by Holger at 4:25 PM 3 comments:

"What did the frog say to the Warmachine?"
"Rivet, Rivet"

And that is what this giant monstrum of a siege machine boils down to. Rivets. Many rivets. Hundreds, thousands, maybe millions. Before I joined the team I didn't even know the word "rivet". Afterwards I wished I never had.

Not really, just joking :) But if you have taken a close look at Roy's designs, you see how much he and Dick loved rivets. They are everywhere. And without more funny or interesting stories to tell, let's have more eye-candy from the master himself. 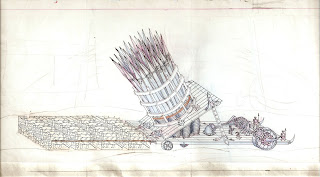 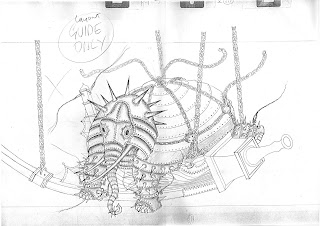 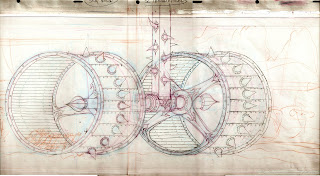 We received this very nice assembly of King Nod's P.O.V of the warmachine from Luke Menichelli and think it is definitely worth sharing. 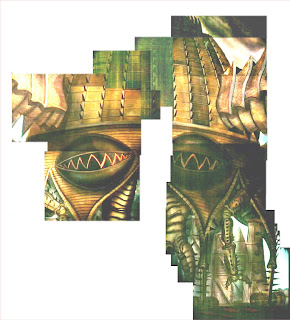 Holger, Andreas, Michael and I felt like kids in a candy store working on the Thief. There was talent and inspiration oozing from every corner, and seeing even the tiniest scrap of paper land in a waste bin could break our hearts.

Naturally it wasn’t long before an unspoken pact was made to liberate anything that landed in the bins. If for nothing else, then to save it for the after world.

The drawback is that one ends up wading through heaps of paper and cells, but slowly a single pile is emerging and building up, containing Layouts and Designs that Roy Naisbitt made of and for the war machine. Some are copies, some are originals, all are huge.

As the workload piled up, we spend more Saturdays and Sundays at the studio and every one of my Saturdays would begin by visiting in his corner, listen to his stories of the long collaboration with Dick or talk about life in general, while we shared a coffee and a few rolls. For almost two years, it was the best way to spend a Saturday.

So with ’s Birthday on the 6th of May just over, what would be better than celebrating it with some of his great Layouts?

What would be better? Well, a few pints of Lager at the local pub of course! 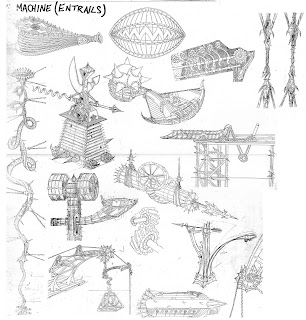 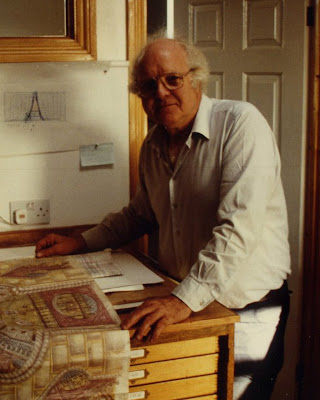 This sequence was all new material which had not been touched by Ken or Art. It's also full of optical illusions. 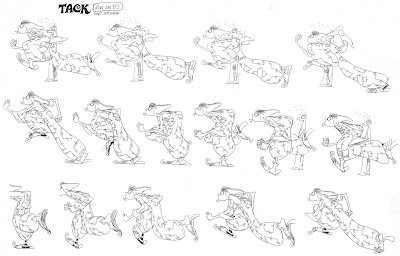 The first scene has a nice trick by Roy, where he utilized the strobing effect of the circles to animate the pattern within. Later in the film Dick asked me to use the same trick to animate the hands of the Witch Mountain when the Thief is flying by.
For the second scene Dick semi-rotoscoped a scene from a Marx Brothers movie, Duck Soup, I think. I'll try to get a screengrab, hopefully tomorrow.

One of the highlights of the film with a stunning animated camera move. This appears as a long continuous scene without visible cuts, but because of the fast action and foreground elements working as a wipe there were opportunities to divide this into separate scenes. I don't know if that was the case, but it would have made the scene easier to manage.
Dick had used the idea before in Ragged Ann and Andy:

...which was in turn directly inspired by Little Nemo: 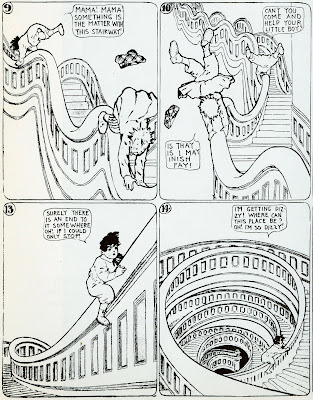 Labels: reference used, scenes
Newer Posts Older Posts Home
Subscribe to: Posts (Atom)
This blog is dedicated to the work on Dick Williams' "The Thief and the Cobbler".