The original opening scene of the film was never finished, although an enormous amount of work had been done on it. Dick's idea was to have all the credits at the beginning of the movie, while a narrator would foreshadow the events of the story in form of a prophesy. The original narration was done by Sir Felix Aylmer. As a temp soundtrack for this part Dick used "Fantasia on a Theme of Thomas Tallis" by Ralph Vaughan Williams. I always was moved by the opening while this music was used. I don't remember if it was impossible or just too expensive to get the rights, but at some point he commissioned somebody to write a similar theme for the final soundtrack. The scene was very long. In the center of the black screen a crystal ball with the narrator's hand moving around it would slowly get bigger and bigger, from a tiny speck right up to a close up, while the credits are shown. Initially it is just a dot, but as we get closer we see things in the ball that reflect the events of the narration. The animation of the hands was never finished,but in 1990 Alyson Hamilton and Dave Byers-Browns started to work on the animation inside the ball. Alyson worked on the moving sand dunes and David animated some twirling round shapes, like little bubbles. (For them this F/X work was a temporary departure from major acting scenes. Alyson animated mostly the Nanny and Yumyum and Dave did a lot of Zigzag.) I hope to get some help identifying the other artists that animated the clouds etc.
John Cousen was supervising the F/x team: Jane Smethurst, Graham Bebbington, Lynette Charters. I would guess that some of them worked on this.
Simon Maddocks spent the majority of the time he worked on the film animating the part of the opening shot where the camera is craning around the Golden City. He achieved this without a computer, just hand drawn perspective construction on every frame.
After going through trace and paint the cels for this animated crane shot were rendered, most likely by the brilliant rendering artist Dee Morgan. Dick wanted the animated elements of some shots to match the look of the background art. Another example of Dee's art can be seen in the scenes with the roses, that Yumyum re-arranges.

John Leatherbarrow shot a test of the whole scene, without the hands, just the crystal ball, to see if the huge camera zoom could be achieved. 5 or 6 pieces of take-over artwork, a slow exponential zoom, and some carefully lined up optical dissolves to hide the joins.
Roy Naisbitt might have been involved plotting all this out. There was another spectacular shot in the film that used this technique, we'll get to that later. It was called “Mouth to Mountain”. (We had names for our scenes instead of referring to them by sequence and scene number, a fact that caused considerable problems when the completion bond company tried to assess the film because they didn't know how to put it into their computer. )

Dick wanted to get all this work out of the way early as he was concerned that later in the game production pressure wouldn't allow him to spend all these resources on this one scene.
His plan towards the end of production in 1992 was to animate the hands himself (perhaps doing a drawing every 16 frames), entrusting breakdowns and inbetweens to another artist. 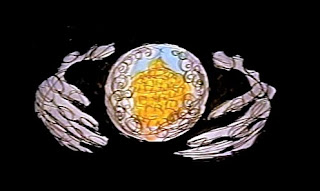 He did some color storyboards with the hands and maybe a few animation poses before production was stopped. 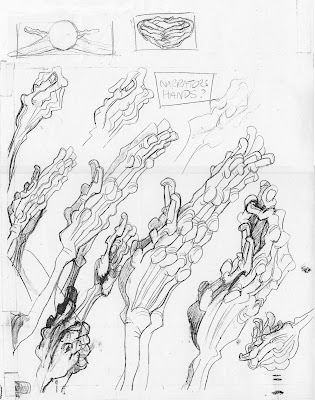 Apr.4, 2008 UPDATE:
Simon Maddocks just sent this: "...Mark Naisbitt did some of the detailing work (like bricks etc.) towards the end and Dee Morgan began rendering the drawings in the latter weeks. The final drawings were laser xeroxed onto yellow paper for rendering with frosted cell work overlays for the detail such as bricks and enhanced gold minarettes etc."
Simon will write about this scene in more detail soon.
Posted by Holger at 4:46 PM

Great to hear the history behind the opening scene-it always felt somewhat akin to the entrance of Omar Sharif's character in Lean's 'Lawrence of Arabia'-hestarts as a tiny figure on the horizon & advances until he's full frame-brave film-making.