Into the City (updated) 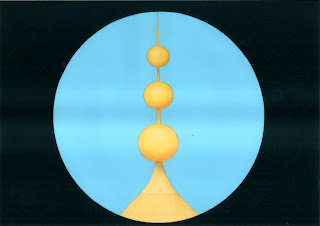 Here is a guest blog entry by our friend Simon Maddocks, in his own words and with illustrations he supplied. Enjoy!

I started work at Richard Williams Studio in the summer of 1990, originally employed as Ramon Guillaumet's assistant. On my first day however, Dick gave me a scene to animate on the War Machine destruction sequence. The second and final scene I animated was the animation of the city from a long shot of the palace to a close-up of the three gold balls. This lasted about 194 frames, and took me a year. I've dug out a few drawings from the scene below: 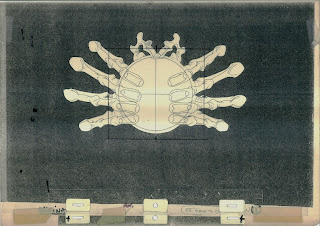 Prior to the city scene were scenes of swirling clouds and other abstract patters within a glass ball held between a disembodied pair of hands. This is a layout drawing guide to the framing of those scenes. 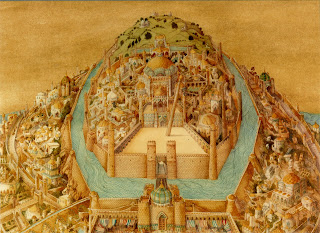 The city in which much of "The Thief" takes place was depicted in many backgrounds in the film, and among the most spectacular was a large painting by Errol Le Cain of the whole city on a hill. The palace in its grounds surrounded by a moat is seen here in this detail. The whole painting was probably about 6 feet wide. 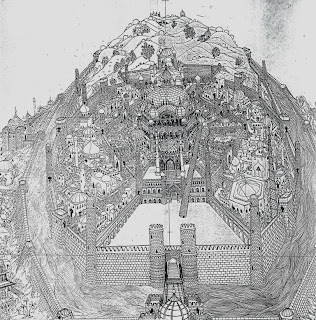 The design for the city was drawn up by Roy Naisbitt as a huge line drawing about 10 feet wide. I was concerned with animating the palace section at the top which was to be at the end of a track in to that section from a wide shot of the whole city.
I stared at this drawing for hours on my first day on the scene, wondering how on earth I was going to start the process. The style of the film was that of Persian miniatures, which had naive perspective which did not really lend itself to the kind of dimensional breakdown that would make animating around the form easy, but I noticed - to my relief - that Roy had actually used perspective on the palace, and the towers around the walls were actually definable on a perspective grid. There was no vertical perspective, all the vertical lines were parallel. 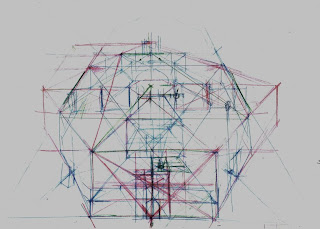 This is an early drawing to try to break down that structure before getting into some detailed grid animation on which I would construct the city. The underpinning of the grid would stop the buildings losing form and swimming around as the animation progressed. 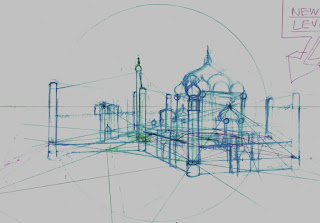 With some basic grids drawn up I started on some rough keyframe drawings as a test of the process and also the composition.{ 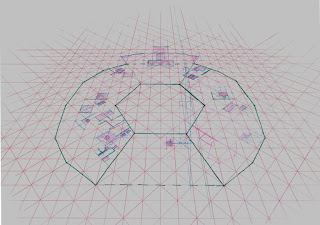 This is one of five or six layers of gound level where the grid is sub-divided and the plans of the buildings are then drawn in. The reason for using subdivideable grids almost everywhere is that you don't need any measurement, which is impractical in a perspective drawing. The subdivision works naturally within the perspective and allows smooth animation based on only a few initial points being laid down. Of course you have to get those right! 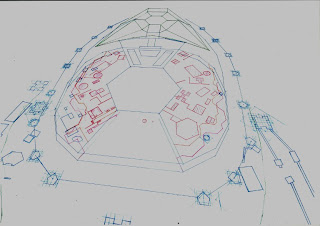 This drawing shows the plans of the buildings and walls for the various ground levels for one of the animation frames. 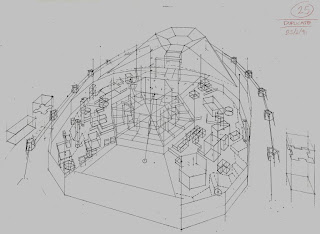 From the plans the heights of the buildings are "extruded" upwards to act as a template for the more detailed drawings. 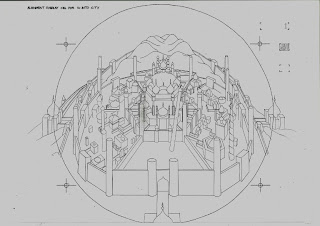 This is the finished drawing of the main details of the architecture and landscape for the first frame. Further detail would be added on additional cell layers for bricks and smaller details, such as the chains supporting the leaning minaret. 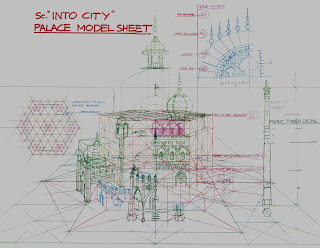 As I had done with the city, the palace needed to be broken down into a constructable set of shapes. The palace was the most detailed building in the scene by far and was to fill the screen, so it needed particularly fine detailing. 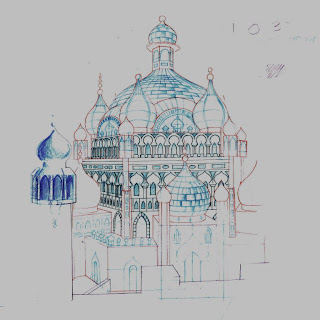 This is a test drawing for the detailed lines of the palace for frame 103. 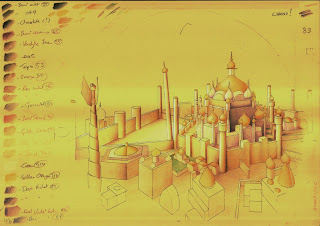 The finish of the artwork was another issue that required much care, detail and sheer craftsmanship. Under Dick's direction, it was decided that the city would be photocopied onto yellow paper, which would then feature coloured pencil rendering with additional layers of hand traced detail such as bricks and highlights on frosted cells. This picture is of a colour test by Dee Morgan. Dee had also worked on the flower renders in the film. Rendering in this sense refers to the subtle coloured pencil shading of the animation frame by frame. This is extremely demanding work because the tendency is for the randomness of the shaded pencil strokes to "boil" from one frame to the next, distracting from the more subtle main animation. 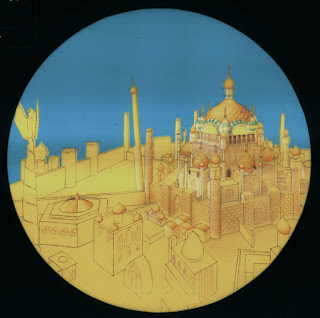 This is a demonstration frame I made up with laser copied city drawing rendered by Dee, with further detail and rendering work on a frosted overlay cell. There is also a flat painted cell for the sky. This is by no means the finished look as there would have been additional exposures to highlight the sky brightness and the gold domes. The cells no longer perfectly align in this artwork unfortunately but I hope it gives some indication where the scene was heading. The disc is about 11.4 inches in diameter

This is a test render of the final frame, centred on the gold balls at the top of the minaret, which were a key plot device in the story. Subsequent scenes in the prologue took over from this frame.The scene was called "Into City". I did the principal animation but others contributed, including Elaine Koo ( in-betweening ), Mark Naisbitt ( detail work ), Robert Somerville, ( in-betweens, detail ), and Dee Morgan ( rendering )Sadly this scene was never finished. The studio had a break for Easter in 1992, and when we came back 12 of the drawings from the middle of the scene had gone missing. These were near-finished highly rendered drawings from Dee that would have taken a long time to replicate. Shortly after that the film fell into the hands of the Completion Bond Company and all artwork was shipped off to the States. No-one picked the scene up again.Working on "The Thief" was very hard work but it was extremely rewarding. Seeing the rough cuts as the film came together was inspiring. It seems rare now to see the close collaboration the team all had directly with Dick Williams, you didn't have to go through a chain of leads and supervisors to communicate with the director you just walked up to him. I learned a lot on that production and made a lot of friends, who I am still in touch with. There's a wide range of opinion concerning the fate of "The Thief". I believe had we been allowed to finish it it would have certainly been an artistic success and probably a popular one too. We'll never know.
Posted by Andreas at 8:59 AM

WOW! These illustrations are amazing and what an interesting story.

Love hearing about all the new stories involved during "The Thief" Production, the more I hear the more it inspires me become even better.

Thanks for sharing this with us and looking forward to hearing (or reading) more stuff about "The Thief". :) (Right when you think you've heard it all; something new always pops up!)

Thanks Simon and Andreas!
Architecture and landscape animation done by hand - unimaginable today.
In a way this one scene could be seen as a symbol for the film as a whole. So much effort, much of the work done but left unfinished.
This post ties in with this earlier post:
http://thethief1.blogspot.com/2007/11/original-opening-scene-of-film-was.html

Here is a photograph of the entirety of Roy's city:

Also this, where you can see the size of the drawing:

Amazing post! It is depressing that architectural/landscape animation has died with the rise of cg. I still like to think there are humans with the drawing skills to accomplish such feats. Too bad that skill may become irrelevant in the digital age and probably extinct.

I love these technical explanations. Thanks a ton! :D

As a fan of animation I immediately tracked down the best quality version of the "Recobbled cut" and WOW.

I found it utterly spellbinding, what a tragedy for art that this movie was lost/destroyed.

I only hope that one day the movie can be completed and restored so that many more people can enjoy it's breath taking beauty!

Approximately how finished is the shot in the workprint? Yellow paper with only skeletal lines? It's only a soft focus image so a viewer can't really assess it properly.

Re: that Cracked article.

They try, but can't describe the true amount of detail in this film. Check out this scene...

I've put some of the line tests on you tube here:

Maybe I'm asking Fred Astaire how to dance but how do you keep curled lines around minarets in register from drawing to drawing?

If any other animators have copies of line tests and rare footage, PLEASE get in touch with me here at The Thief archive! Of course we're still looking for a decent quality copy of the film itself as well - that is, a PAL VHS of the workprint, and a 35mm print of the butchered release versions.

You can reach me at gilchristgarrett at gmail.com, or via Youtube at thethiefarchive .

This film is the animation equivalent of Bouguereau's entire body of work!

>how do you keep curled lines around minarets in register from drawing to drawing?

No huge mystery, I think one of these:

1. Draw carefully and test.
2. Construct on grid!
3. Some of the frames at the end where we track smoothly up to the top of the minaret were a series of carefully scaled photocopies with some drawing enhancement. Robert Somerville did a lot of work on that bit.